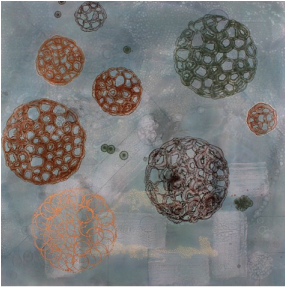 This work explores and reflects upon my interest in Buckminster Fuller’s inventions and observation of elements in physics and science. The two inventions by Fuller I am most interested in are the Dymaxion World Map and the Geodesic Dome. The idea of the Dymaxion Map reminds me of the type of space sometimes created in the paintings. The surfaces of my paintings are flat, yet there is often a sense of depth that one sees through the layers. The Dymaxion Map or Fuller Map is a projection of the globe onto the surface of an icosahedrons, which can be unfolded and flattened to two dimensions.  I became interested in Buckminster Fuller’s Geodesic Dome because of how they are constructed. Their lattice structure reminds me of the grid structure I draw to attain order at the beginning of each painting. The other fascinating element of the lattice-work of the Geodesic Dome is the triangular rigidity that distributes stress evenly across the structure and creates a maximum amount of space within it. My own “lattice” grid drawing is used to establish composition over the rigid format of a square and in turn, through the process of painting and the applications, the lattice grid contributes to a kind of space/depth.

As for the series on paper, “Understanding Fuller”, I decided to try and combine various points of references, visual images, and quotes in relationship to the painted areas. Here, I am responding to the concept of fractals. Fractals are similar patterns, which repeat similar patters at a different scale.  However, rather than repeating formal visual elements that would create natural fractals, I am trying to create a fractal where disparate content may resonate with process, language, and/or conceptual similarity.  My points of reference can be as simple as an image on the front cover of the newspaper or a few lines in a poem, to the complexity of physics in relationship to the universe. By placing the various references together, I am aiming to create a visual systasis where the varied parts may intertwine through some semblance of form.